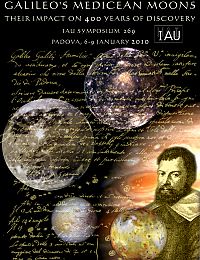 The discovery of the Medicean Moons by Galileo Galilei took place in Padova from January 7 to 15, 1610.
The discovery added four new worlds to the known solar system and dealt a blow to the Earth-centered universe. Sidereus Nuncius not only had a major influence on the development of astronomy and science, but also upon religious and philosophical theories and social behavior. The IAU Symposium S269, to be held in Padova 400 years after the discovery, has several aims:

Galileo and the natural philosophers of the 17th century envisioned the planets and moons in our solar system to be habitable worlds. By the mid-20th century, the view had changed - if the "Plurality of Worlds" was a valid concept, it applied to objects in orbits around stars elsewhere in the Galaxy. Today, ongoing and planned space missions to the Medicean Moons, to our Moon, Mars, Saturn and Enceladus again reveal a fascination with alien life, but this time the focus is on potential host sites for extremely primitive forms of life nurtured by the presence of water. Water and other crucial molecules for sustaining life will undoubtedly be discovered on some of these neighboring worlds by the Extremely Large Telescopes and dedicated orbital missions of the next decades. The prospects for finding Earth-like, habitable, and perhaps even inhabited worlds are real and clearly before us. Galileo's discovery of the Medicean Moons thus continues to point the way towards a deeper understanding of our place in the Universe - but now from the linked perspectives of the physical and life sciences.