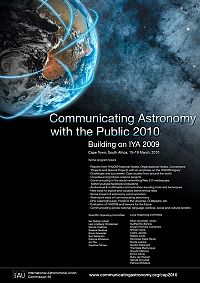 This conference builds on the astounding success of the International Year of Astronomy 2009 (IYA2009). It will bring together producers of astronomical information (research scientists), public information officers (connected with large observatories and space missions), and mediators (science reporters and writers, staff members from museums, planetariums). CAP2010 will focus on the outcome of the IYA2009 activities, their evaluation and plans for future work. Furthermore, as this meeting will be held in South Africa, another major theme will be ‘stimulating astronomy communication in the emerging world’.