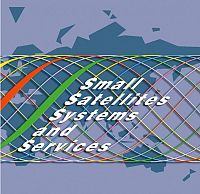 In recent years, Small Satellites have reached good technological maturity and are used in scientific missions and operative commercial applications. The amount of data they produce is growing at a relentless pace. Small Satellites have already demonstrated their capability to play a role in gathering data to build knowledge: maritime activities of commercial vessels can be understood by monitoring Automatic Identification System signals; crops yield can be deducted from multispectral Earth remote sensing data. These are just two of many examples that can be found in the papers recently presented at Small Satellite conferences.

More demanding and complex tasks are required from satellite missions: the combination of fast-response, high-revisit, near-real-time and high resolution observations becomes essential to reach missions objectives. From weather forecast to fast access to remote areas for situation awareness, from astrophysics to atmospheric research, Small Satellites are already taking a share. The pace at which space assets will increase their role in the knowledge-based society largely depends on the time elapsed from the moment data are acquired to the moment knowledge is available to the users. Broad minds and coordinated investments are necessary to establish synergies between Small Satellites and other technologies crucial to achieve users’ needs. Small Satellites are at the dawn of being instrumental for modern society. The 4S Symposium of 2010 is the opportunity to gather ideas and visions on the Small Satellite role in the knowledge-based society of the second decade of the 21st century.