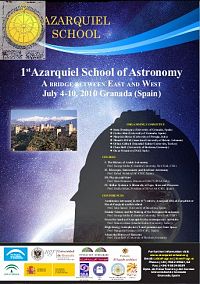 This project proposes to organize the first Azarquiel School of Astronomy  for university students from Arab countries and from the EU. It will be  devoted to promote cultural exchange, bridging the gap between the East and the West and  to promote advanced-level teaching in Astronomy, motivating future research activities. Special attention will be given to the historical contribution of Arabs to Astronomy and Science.

The number of participants will be limited to above 40 students. From 50 to 60% of the students should come from Arab and Middle East countries.  Students will be selected attending to geographical representation, gender balance and curriculum.

Renowned experts with international reputation in their field of research will teach, during one week, several courses and  open-conferences related with observational and theoretical astrophysics. One of the courses and two of the open-conferences will deal with the contribution of Arabic Astronomy to Science. History indicates how the Arabs were leading in culture and science, specially astronomy, over a long period of time. The school is named in honour to Azarquiel,  the most famous within the Al-Andalus astronomers.

The school will be held in Granada (Spain), historically a crossroad between Western and Arabic worlds. The University of Granada will host the school in its  Residence “Carmen de la Victoria” located at the Albayzin, the old arab suburb in front of the Alhambra. In this way the cultural and historical connection between the East and West will be emphasized.