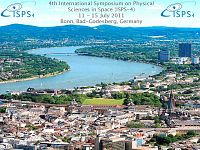 This is the fourth symposium in that series, following ISPS-2 organised by CSA in 2004 in Toronto, Canada, and ISPS-3 organised in 2007 by JAXA in Nara, Japan. ISPS-4 is organised jointly by ESA and DLR on behalf of the IMSPG and will be held in Bonn from July 11 – 15, 2011.

ISPS-4 is the major international scientific forum for researchers in physics utilising the space environment, in particular microgravity. It is intended to inspire and encourage cross-cutting discussions between different scientific communities working in the same environment. Contributions are solicited discussing results of experiments carried out on drop towers, parabolic aircraft flights, sounding rockets, unmanned recoverable capsules and, last but not least, the International Space Station ISS.