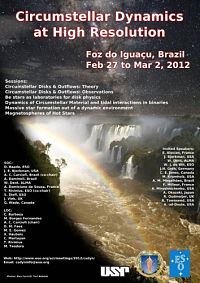 The dynamics of circumstellar (CS) envelopes is an active research frontier that has benefited greatly from the advent of high-resolution observational techniques in the spectral, spatial and temporal domains.  The observational discoveries and theoretical results emerging from this field have broad implications for many astrophysical topics, ranging from cosmology (via a better understanding of the progenitors of GRBs, for instance), to star and planet formation (through a better description of CS disk dynamics in which viscosity plays a key role).

The diverse and complex CS environments revealed by these observational techniques are particularly evident near hot high-mass stars, where stellar radiation plays a large if not crucial role in continuously shaping the immediate environment.

High-resolution observations (spatial, spectral, and temporal) have provided important information in several frontline research topics.  For example, many hot stars have been shown to be very rapidly rotating, in a regime where geometric deformation and gravity darkening become important. CS structures have not only been resolved spatially, but have been followed over characteristic variation timescales. This dynamical evolution has been modeled for disks and winds: we are now directly observing and measuring the consequence of the physical mechanisms operating within the CS environments. As a result, current observing facilities have allowed the field to progress from a static picture of the CS environment towards understanding its dynamics and concomitant impact
on the evolution of the central star.

This workshop aims at bringing together the active community of hot stellar astrophysics, both theoreticians and observers, along the common topic of what can be learned from high resolution observations.

Oral sessions during the meeting will be held on: