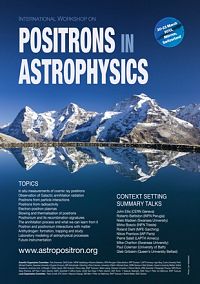 Positrons are the most common and easily produced form of antimatter, both in the laboratory and in astrophysical scenarios. In the eighty years since their prediction and their experimental discovery they have become a major player in physics and astrophysics, spanning very disparate fields from galactic astrophysics to semi-conductor and surface physics, not to mention medical and industrial applications. In each of these wide domains huge progress has been made in theory, experimental methods, and modeling. Yet major questions and puzzles remain. The breadth and diversity of the fields involved have tended to limit the extent to which the various “positron communities” interact and learn from each other. A key aim of this meeting is to bring scientists working in the disciplines of atomic, molecular, surface and materials physics together with colleagues whose interests lie in various astrophysical fields.

While the emphasis will be on topics directly related to positrons both in physics and in astronomy, the scope of the workshop will also include other forms of antimatter both in the laboratory and in space. Review talks on a variety of antimatter topics will set the context and summarize the current state of the art in the different fields, while more specialized presentations will report on the latest developments. The objectives of the workshop are to identify the specific issues to be tackled next in each domain and to encourage future progress through interactions between the different research areas within and beyond positron science.