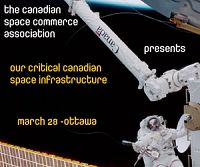 The 140 companies and organizations listed in the Canadian Space Directory generated $3.44 billion CDN in revenue and employed over 8000 Canadians in 2010, according to the 2010 State of the Canadian Space Sector Report. These firms support the technologies required for weather forecasting, remote sensing, GPS systems, satellite and cable television, remote phone communication systems and even our Canadian astronaut corps.

But this infrastructure is in a state of crisis. The December 26th, 2011 Canadian Press article “Canadian Astronauts could be grounded for years after next mission” reports that “Canadian astronauts could be stuck on the ground for years following Chris Hadfield’s space mission scheduled for 2012.” The December 15th, 2011 Ottawa Business Journal article “Lost in Space” raises concerns over whether Canadian developed planetary rover technology will remain viable after government funding expires in spring 2012 and even the Canadian Astronomical Society is distributing an online petition opposing the expected and dramatic decrease in funding for space based astronomy programs.

What must we do to support and grow this disparate group of private and public organizations, capabilities and supporting infrastructure? Make your voice heard. Attend and contribute to the 2012 Canadian Space Commerce Association national conference focused on our critical Canadian space infrastructure.