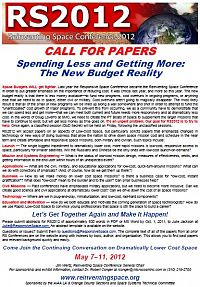 Space Budgets WILL get tighter. Last year the Responsive Space Conference became the Reinventing Space Conference in order to put greater emphasis on the importance of reducing cost. It was critical last year, and more so this year. The new budget reality is that there is less money available—to fund new programs, cost overruns in ongoing programs, or anything else that we need to do in space, either civil or military. Cost overruns aren’t going to magically disappear. The most likely result is that all of the small or new programs will be lined up along a wall somewhere and shot in order to attempt to fund the “unanticipated” cost growth of major programs. To prevent this from occurring, we as a community have to demonstrate that we can spend less and get more—that we can meet both current and future needs more responsively and at dramatically less cost. In the words of Doug Loverro at SMC, we need to create the PT Boats of Space to supplement the larger missions that have to continue to exist, but will get less money as time goes on. It’s an urgent problem. Our goal for RS2012 is to try to help. Once again, a classified session (DoD Secret) will be held on Friday, following the unclassified sessions.

RS2012 will accept papers on all aspects of Low-Cost Space, but particularly solicits papers that emphasize changes in technology or new ways of doing business that allow the nation to drive down space mission cost and schedule in the near term and create affordable and responsive space missions, both military and civilian