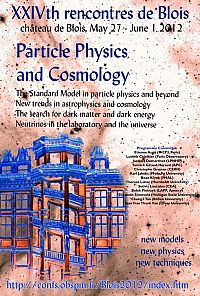 The conference will consist of plenary sessions for invited in depth oral presentations (review talks and talks on specific specialised topics), and contributed papers, in the form of relatively short oral papers or posters. We will aim to achieve a balance between review talks, provocative talks given by recognized specialists, and shorter contributions, special emphasis being placed on active participation by younger researchers and post-docs. Parallel sessions are foreseen, and are being organised as the need arises.

This will be the 24th meeting in this series of annual international multidisciplinary meetings, created in 1989 by Jean Tran Thân Van and which has in the past covered many topics in physics, astronomy and biology. All sessions take place in the Château of Blois, a beautiful renaissance castle which has housed many French kings, and notably François 1st. Meals are served in the castle to all participants, in order to encourage interaction between scientists at all levels. Participation is limited to about 150 persons.

The meeting will be articulated around the results and their impact on current theories from the three major new experimental and observational facilities which are coming on line or have recently been commissioned: