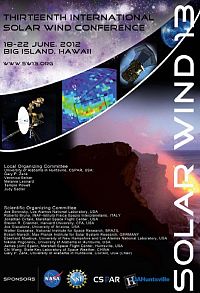 The quadrennial Solar Wind meetings are an established and grand tradition in the field of solar wind physics. The Solar Wind meetings have proved to be a unique and valuable element of the solar and space physics research community, being the only meeting that is organized exclusively to address major problems and progress in the field of coronal and interplanetary physics over the past 3 to 4 years. As a consequence, the meeting has grown significantly in size and importance with a widely referenced refereed proceedings that summarizes the topics of the meeting.

The Thirteenth International Solar Wind Conference will be organized by the University of Alabama in Huntsville's Center of Space Plasma and Aeronomic Research (CSPAR) and the NASA Marshall Space Flight Center, under the direction of Dr's Gary P Zank and Jim Spann. The meeting itself will take place at the Sheraton Keauhou Bay on the Big Island, Hawaii, USA, from 18-22 June 2012. (17 June - Registration and Welcome Reception).

The conference will conform to the traditional solar wind themes, addressing the current state of knowledge in the relevant fields of solar and heliospheric physics. In particular, the conference will address: