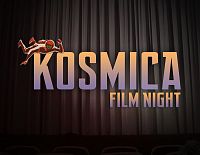 The information is outdated?

KOSMICA is changing its format to bridge Earth and space through art and other cultural experiments out of this world. Our next gathering for the cosmically curious will bring together an international line up of artists and film makers to share cultural ideas inspired by our first KOSMICA Film Night.

Doors and bar open at 6.30pm giving those attending time to mingle and chat with Arts Catalyst team, artists, scientists, familiar friends and new faces over a drink and some free popcorn
Film screenings from 7pm, with an introduction by Nahum Mantra
A chance to discuss and debate what you've seen with film makers including Ulrike Kubatta.

We expect this will be a popular event. We can only have space for limited numbers so please book your KOSMICA Film Night tickets early (£3 inc popcorn). We will keep 10 tickets for those wanting to pay at the door on the night, they will be on a first come basis.
The Films

Today we find our frontiers for manned exploration and adventure into the unknown on the brink of exhaustion. Out of this predicament, The One Way Ticket proposes to send one person on a voyage into deep space from where they will not return. The notion of not coming back opens up an exceptional scenario, so far unprecedented in the history of human space travel. Focusing on the experience of the lone astronaut, the short film is a response to research into a range of human factors that are particular to the mission and also underline its extraordinary nature. It depicts a collection of episodes transmitted from the spacecraft. Based along the path of the mission trajectory, the images simulate the experience of being in space and also infer some of the unique phenomena that can occur on a one-way trip.

Campo del cielo 5.14", Katie Paterson
A large Campo del Cielo meteorite, which has been travelling through space and time for over four and a half billion years, has been cast, melted, and then re-cast back into a new version of itself, retaining its original form. A newly formed yet still ancient meteorite, still imbued with its cosmic history. The iron, small rocks, metal and dust inside becomes reformed, and the layers of its cosmic lifespan - the warping of space and time, the billions of years of pressure and change, formation and erosion - become collapsed, transformed and renewed.
In years to come, the meteorite will be launched into space.

She should have gone to the moon 58", Ulrike Kubatta
She Should Have Gone To The Moon presents a uniquely personal chapter in the history of the space race. It tells the astonishing story of the pilot and pioneer, Jerri Truhill, who was trained in 1961, as part of NASA’s top secret Mercury 13 programme, to become one of the First Lady Astronauts. The documentary is a lyrical journey propelled by childhood aspirations, shattered dreams and a lifelong battle against female stereotypes and male prejudice. This is a film about Jerri Truhill’s ambition to conquer the unknown and the filmmaker’s fascination with a woman, who dared to break down all barriers in aviation. Set against the historical backdrop of the Space Race, the documentary both constructs an intimate portrait of Truhill and explores a unique chapter in American culture and society.
How to find Kosmica at The Arts Catalyst

If you've not visited us before, it's useful to know that the numbering on Clerkenwell Road is rather irregular. Check out map and full public transport information here.

The event will be held on the first floor and there is no lift; please contact The Arts Catalyst to discuss any specific access needs.

For tracking this event on your google calendar, click here