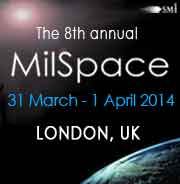 Don't miss the chance to attend the 9th annual Military Space conference, taking place in London on the 31st March and 1st April 2014.

We would like to invite you to join the debate with senior military figures from across the globe and discuss how militarisation of space is evolving, including: civil-military cooperation, utilisation of space data, US and European approaches to space operations and future challenges.

Hear from the exceptional speaker line-up

Please visit www.military-space.com for more details on the event programme and speaker topics.
Alternatively contact the team for further details on: +44 (0) 20 7827 6054 / 6064