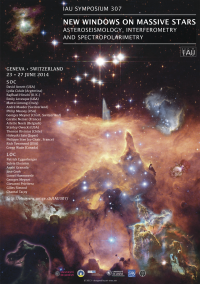 The important outputs of mass, momentum and energy of massive stars strongly modify their environment and make them key agents in the evolution of galaxies during the whole of cosmic history. Their high luminosities make them objects detectable at far distances in the Universe. Massive stars are thus important probes for studying star formation at high redshifts. As the progenitors of core collapse supernovae, of the long soft Gamma Ray Bursts, and of neutron stars and black holes, they are connected with the most intriguing objects in the Universe.

Their physics is, however, not yet very well known and such basic understanding as the origin of the various massive star populations (Be-type stars, red and blue supergiants, Luminous Blue Variables, Wolf- Rayet stars) are still matters of debate, as well as the nature of the progenitors of the various types of core-collapse supernovae (type IIP, IIL, IIb, IIn, Ibc).

Among the great challenges faced nowadays in our understanding of massive star evolution, we can cite the following two points :

Hydrodynamical processes: turbulent flow, rotation, magnetic fields, as well as mass loss, are all basically fluid dynamics of plasmas. These processes, by governing the quantity of fuel available for a given nuclear burning stage, by modifying the chemical structure of the stars, and by allowing the total mass to strongly decline with time have a dramatic impact on the evolution of massive stars. This also has strong consequences on the chemical evolution of galaxies and on the evolution of their spectral energy distribution.

Role of multiplicity in massive star evolution : in addition to the complex physics involved in single stars, multiplicity adds new types of interactions through tidal forces, mass transfer and/or stellar mergers, opening the path to a variety of different evolutionary pathways populating various parts of the HR diagram and leading to specific final structures and thus particular supernova events.