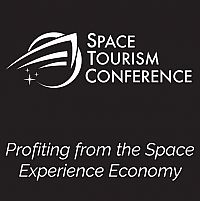 Space tourism is soaring. Sky high. Or rather, space high. High enough that it deserves its own conference!

With decades of development behind it, and passing from its first phase—seven people have each paid millions of dollars to rocket to the International Space Station (ISS) as private space travelers with one flying twice—the space tourism industry has entered its next generation with private enterprise flights and a variety of other consumer offerings.

This next evolution of the market will yield major, long-lasting advances—including lunar flybys.

The industry is rocketing toward stratospheric value, with news breaking almost weekly from the major players driving the charge:

The Space Tourism Conference (STC) is an annual event that will be produced with support from the Space Tourism Society (STS), the world’s leading space tourism advocacy organization for over 20 years.

The April 28 conference date was deliberately chosen as the anniversary of Dennis Tito’s lift-off into the history books in 2001 as the world’s first private space tourist. Tito’s flight jump-started the space tourism industry, generating massive consumer awareness as to the possibilities of private space travel and commercialization of space through earth-based experiences.