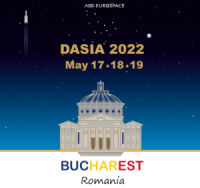 DASIA is an annual conference organised by Eurospace since 1996. It gathers space data systems specialists over 3 days for presentations, workshops/panels and discussion. It provides opportunities for exhibitors and networking. DASIA is an important event in the space community.

DASIA has formally been executed as a yearly conference since 1996, with yearly predecessors back to 1990. It embraces technical and managerial aspects of development, operation and maintenance of data-handling related components and systems. It encompasses hardware and software for space and aircraft systems or systems for other sectors sharing similar requirements for high reliability and complexity. Cross-domain topics and participation have a high priority at DASIA with other domains including e. g. transport, communications, navigation, energy, remote sensing, robotics and automation.

DASIA is a 3 days conference with 2 tracks covering 60-70 presentations followed by Q&A’s. The presentations are mainly based on paticipants abstracts selected from an open invitation where the contents of the selected abstracts determines the topics of the individual sessions. In addition it includes keyote presentations and workshops/panels in plenum, with contributions from invited people and from the participants that have signed for the conference. Companies, agencies and institutions exhibit their products next to the conference rooms, at the latest conferences up to 13 exhibitors.

DASIA participants are traditionally mainly coming from the space industry sector including SME’s, from space agencies including in particular ESA, from universities and from institutes. They mainly come from Europe but the participation is open to the world with participants coming from e.g. USA, Canada, Russia, Israel, the Emirates, Japan, Korea, or Australia.