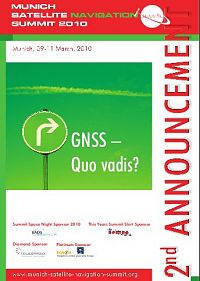 The Summit starts on March 9, 2010, 17.00 hrs with the Opening Plenary Panel. A Bavarian State Reception in the famous ”Residenz München” is giving opportunities for networking. The technical program of the Munich Satellite Navigation Summit presents on March 10, 2010 a concise update on the main activities in worldwide satellite navigation systems, in particular on

Emphasizing a future trend in satellite navigation, this year’s Summit will focus on special sessions on safety and security, in particular also on the use of the Galileo Public Regulated Service (PRS).

The Summit is part of the efforts of the Bavarian government and the cluster on aerospace and satellite navigation to stimulate applications and services in this high-tech field in the greater area around Munich.