›Legacy of AKARI: A Panoramic View of the Dusty Universe 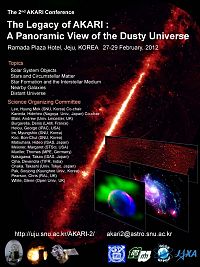 AKARI was launched on February 21, 2006 with the objective to carry out all sky surveys at mid- and far-infrared wavelengths, with additional pointed observations across this wide range in wavelength. It operated for approximately 550 days at cryogenic temperatures until August 26, 2007, after which it continued as a warm mission in the near infrared until recently.

The first dedicated conference on AKARI's results was held during 16-19 February, 2009, at the University of Tokyo, Japan. Since then, a large number of papers have been published in special issues of The Publications of The Astronomical Society of Japan,  Astronomy and Astrophysics, and other major journals. It is now time to bring researchers working on the data obtained by AKARI together again in order to discuss the scientific output and future research direction.

AKARI made an all sky survey at six wavelengths between 9 and 160 microns, with the point source catalogues now open to the international community. These catalogues will serve as invaluable assets to astronomers working on various fields and facilities. Other wide area surveys with AKARI include
the North Ecliptic Pole Survey and the South Pole Survey. AKARI’s legacy datasets will provide research opportunities in areas such as the interstellar medium, evolved stars, nearby galaxies and the distant Universe. All astrophysical areas that utilize the AKARI data will be covered by this conference. Any researchers working on related subjects are encouraged to attend the conference, regardless of any previous experience using AKARI data. The tentative list of the topics include;