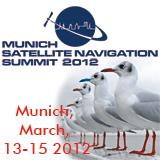 The Munich Satellite Navigation Summit 2012 will be held in the famous “Residenz München”, Germany March 13-15, 2012. It has been established as the European and International conference with global impact featuring invited high-ranking worldwide speakers from industry, science and governments dealing with the directions of satellite navigation now and in the future.

The Summit starts on March 13, 2012 with the Exhibition Opening and Champagne Reception at 16.30 hrs. The technical programme of the conference starts with the Opening Plenary Panel discussing the topic “GNSS and Security” at 17.15 hrs. Afterwards the Bavarian State Reception in the famous ”Residenz München” is giving opportunities for networking.

The technical program of the Munich Satellite Navigation Summit includes plenary discussions among invited speakers and presents a concise update on the main activities in worldwide satellite navigation systems, in particular on

A special session on the Chinese Compass is planned. A new part of the Summit will be dedicated to the current status and perspectives of the European Earth monitoring programme GMES. In addition a session on the Galileo Public Regulated Service (PRS) and related aspects is envisaged.

The Summit is part of the efforts of the Bavarian government and the cluster on aerospace and satellite navigation to stimulate applications and services in this high-tech field.