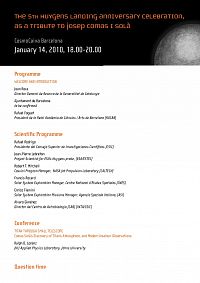 Huygens landed on Titan on 14 January 2005. On the occasion of the 5th Anniversary of the Huygens landing, the main scientific and engineering achievements of Huygens in combination with the remote sensing of the Cassini Orbiter observation at Titan will be reviewed during a 3-day long international meeting to be held January 13-15, 2010. The objectives of the meeting are to prepare:

1. Huygens Legacy
2. Review of Expectations for the Continuing Orbiter Mission
3. Objectives that will remain for Future Missions to Titan

The venue will be the CosmoCaixa science museum in Barcelona, Spain, situated not far from a singular modernist building: the Fabra Observatory, which houses the telescope, always active, from which in 1907 Josep Comas i Solà observed the atmosphere of Saturn's moon Titan. The description of the discovery was first published by the Spanish astronomer in the “Astronomische Nachrichten.”

The conference will include introductory lectures, invited talks, contributed talks and posters, as well as public talks on the major scientific topics listed below:

1. Highlights of the Huygens in situ exploration science return
2. Strength of the combined Huygens in situ and Cassini orbiter remote sensing approach at Titan
3. Role of complementary ground-based observations, laboratory data and modeling in the interpretation of space-based data at Titan
4. Ways to preserve the unique scientific and engineering knowledge obtained from Huygens and transfer it to future generations of Titan (and other satellites) explorers: the Huygens Legacy
5. Lessons learned from Cassini-Huygens for future exploration of Titan: Optimizing the Huygens legacy and preparing for a return in the Saturnian System

We encourage you to circulate the announcement among your colleagues, and to bookmark this website as your primary source for the latest information on this Cassini-Huygens event.