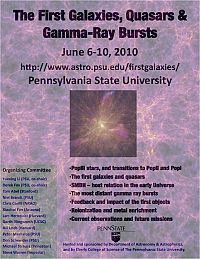 The first generation of galaxies, quasars and GRBs is an exciting new field, and a major science goal of all the upcoming missions (e.g., ALMA, JWST ...). Over the past few years, there have been rapid progress in both observational and theoretical cosmologies. To date, hundreds of star-forming galaxies, dozens of luminous quasars and gamma ray bursts have been discovered at the cosmic dawn, including the most distant GRB detected at redshift z=8.2. However, many fundamental questions remain open, such as the nature of these objects, their formation and evolution, and their impacts on the ISM /IGM and structure formation at later time.

It's therefore extremely useful to have a focused conference dedicated to this important emerging field, and to bring together both observers and theorists to explore the frontier of cosmology. This conference aims at fostering collaborations between both sides, bringing in young people, and stimulating further progress.