›Spiral Structure in the Milky Way: Confronting observations and theory 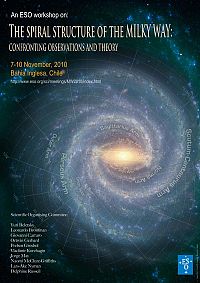 Our knowledge of spiral arm traces in the Milky Way and kinematics in the solar neighborhood have increased significantly over the last decades. Despite of this, there is still not yet a consensus on basic parameters of the spiral structure in our Galaxy such as number of major spiral arms and their location, its pattern speed(s) and amplitude, and its relation to the central bar. Major new facilities (e.g. ALMA, GAIA, LSST, VISTA, VST) will provide a wealth of data on the spatial and kinematics distributions on material in the Galaxy. Thus, it seems appropriate to perform a census of our current data, confront them with theory and models of spiral structure, and thereby map the path towards a consolidated view of the spiral pattern in the Milky Way. With these objectives, we are organizing a workshop November 7-10, 2010, at Bahia Inglesa, Chile, to bring together observers and theorists, and thereby facilitate an in-depth discussion of the spiral structure in the Milky Way.

The main topics will be:

The workshop is planned for 3.5 days with 4 sessions each of the full days. The first 3 sessions will have long reviews (40+5m) and some contributed talks (15+5m). The last afternoon sessions will be devoted to discussions plus short summaries of selected posters.