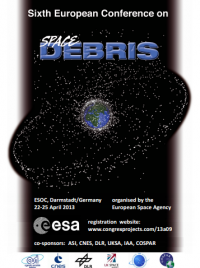 Since 1957, more than 4,900 space launches have led to an on-orbit population today of more than 22,000 trackable objects, with sizes larger than 10 cm. Approximately 1,000 of these are operational spacecraft. The remaining 94% are space debris, i.e. objects which no longer serve any useful purpose. About 64% of the routinely tracked objects are fragments from some 250 breakups, mainly explosions and collisions of satellites or rocket bodies. In addition, an estimated 700,000 objects larger than 1 cm and 170 million objects larger than 1 mm are expected to be in Earth orbits.

Due to relative orbital velocities of up 56,000 km/h, centimeter-sized debris can seriously damage or disable an operational spacecraft, and collisions with objects larger than 10 cm will lead to catastrophic break-ups, releasing hazardous debris clouds of which some fragments can cause further catastrophic collisions that may lead to an unstable debris environment in some orbit regions (“Kessler syndrome”). Space debris mitigation measures, if properly implemented by spacecraft designers and mission operators, can curtail the growth rate of the debris population. Active debris removal, however, has been shown to be necessary to reverse the debris increase.

To improve our understanding of the space debris environment, assess related risks, mitigate its growth, and control its stability, a multitude of technical  disciplines is required. Many of these will be addressed in the course of this conference by recognized experts in their fields.