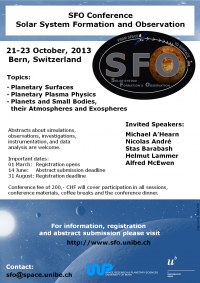 The conference is divided in five different sessions/scientific fields (see details below). At the moment only the invited speakers are listed. Each of the speakers will hold a starting talk in the corresponding session. The full program with all details about the talks will be available on 05. August 2013. A hard copy of the program will be available at the beginning of the conference.